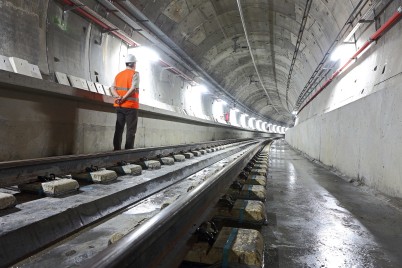 The Problem: Manco secured a significant contract to install rail lines into 31 kms of tunnels for Sydney Metro. As with most sizeable public contracts, Manco needed to be able to provide bank security over completion of the job.

The Systems Connect Line-Wide project, creating two rail tunnels under Sydney Harbour, is the single largest infrastructure project ever undertaken in New South Wales. Manco was chosen for a key part of the process, custom-designing and building remote-controlled machines which could roll through the tunnels laying rail-line as they went.

It was clear this high-profile deal had the potential to attract significant business Manco’s way and managing director Bryan Black was busting to make it happen.

But, as is the case with most substantial Government contracts, Manco needed to be able to provide performance and advance payment bonds to the New South Wales Government.

Black needed to find around $3 million in cash for these bonds and, though very excited for Manco to secure the contract, BNZ’s Jason Corbett says the bank couldn’t take on all that risk alone.

“Manco had been high-performing customers of ours for decades and we were determined to help them meet the requirements of the contract, but we couldn’t do it alone”.

Corbett contacted New Zealand Export Credit (NZEC) and it was quickly established this might be an opportunity to use NZEC’s General Contract Bond Guarantee.

NZEC’s Head of Business Origination Peter Rowe says Manco was able to supply solid financial information and clearly had the confidence of its long-time bank.

“Manco really know what they are doing. We were comfortable entering a risk-share partnership with BNZ where we each took 50% of the risk on the bonds,” Rowe says.

Black says he is grateful for NZEC’s support in getting the contract across the line.

“I don’t see Export Credit as being any different from our steel supplier,” Black says. “They are part of our team, part of our family.”

Manco’s success on the project has led to extensions on its contract. As well as laying the rail line, Manco became involved with installing the overhead electronics in the tunnels. With the additional work that has come its way, the tunnel rail project will end being worth about $20 million to Manco.

“We are a small privately-owned New Zealand manufacturing company,” Black says. “We don’t often get opportunities like this.”

Black established Manco in 1991. By that stage, he was already well in to his 47 years in business. Manco has an annual turnover of around $30 million, but that looks set to explode after the Sydney Harbour contract.

“The ramifications have been unbelievable,” Black says.

On the back of the reputation it has forged during the rail tunnel project, Manco has now been awarded a contract to build nine rubbish trucks for the City of Sydney – a rare and prestigious opportunity to contribute to the city’s fleet. Manco is now in negotiations with Queensland Rail to supply a number of vehicles.