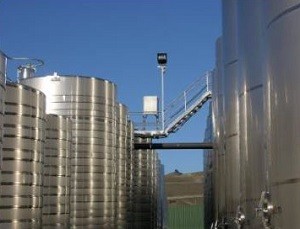 "It seemed to me an impossible situation" – that was Bob Richards' initial assessment when presented with a big opportunity late last year in wine industry technology.

Richards had just been offered a deal to supply VinVizard temperature control technology to one of the world's largest wine suppliers – Vina Concha Toro SA of Chile. This supplier's bottled volume is the seventh largest in the world – easily more than the entire wine output of New Zealand.

But Vina Concha Toro SA was not able to completely pay for the technology until up to six months later. Richards' suppliers couldn't afford to wait that long for payment and Richards couldn't borrow any more money from his bank.

"I was a relatively small company just emerging from the Global Financial Crisis on survival rations," he says.

But Richards had researched the services of the New Zealand Export Credit (NZEC) and decided to approach them.

NZEC indicated that as Bob's company, Wine Technology International Ltd, was well established in a number of export markets and had delivered this technology previously, it would consider providing a Loan Guarantee.

"There is a risk-based premium the business needs to pay but the guarantee can open up access to working capital to be used for pre-shipment costs, such as paying suppliers and in this instance was also able to be used to support extended payment terms for Vina Concha Toro SA."

Bob approached his bank, Westpac, to see if it could come to the party.

Westpac International Business Manager Ross Groves says while Bob and his wife did their personal banking with Westpac, the company only had transactional accounts with the bank.

"To support customers with their working capital requirements, the bank needs to be satisfied that the company's core business is sustainable and prior to an approval being sorted we complete a due diligence process.

"This process includes assessing the capability of the company to perform to meet their contractual arrangements, what previous transactions have been undertaken and the markets the company deals in.

"The assessment also considers if the company could support facilities themselves without NZEC support, would the bank support it by providing funding."

While Westpac and NZEC were making their detailed assessments, Bob had a supply deadline to meet and was engaging with a business partner in Chile.

"It was a stressful situation," says Bob. "I had to assess from all angles the risk associated with the deal. Without the deep level of trust I had in my partner, and the knowledge I had of the industry, I wouldn't have proceeded."

In the end, Westpac approved a US$107,000 facility for the company.

"In the case of Wine Technology International, being a smaller company, we felt that the bank would enhance the credit by advancing a structured Trade Finance facility linked to the underlying agreed payments terms," says Ross.

The approval allowed the deal to go ahead six weeks after Bob was first approached by the Chilean wine supplier.

Vina Concha Toro SA then paid Bob when agreed and now the technology is "a showpiece" for the winery. He has had a string of enquiries as a result.

"Chile wants to raise the quality of its wine. At the moment it produces a vast quantity. The cost of labour has been cheap but is increasing. Power is expensive and power supply is bad in the evenings. Our technology saves power and labour.

"Our core technology is temperature control of fermentation. We can keep a vast volume of wine at a constant temperature. We can do more pumped turnovers of the wine, which can assist in wine quality and accelerate fermentation.

"There's a four to five-year payback on investment for the winery. Our system can be monitored remotely and extended to regulation of chillers, which then decreases payback time to one or two vintages."

The VinWizard system has been installed at 130 client sites in eight countries, but the deal will always be memorable for Bob.

"Taking such a leap can be daunting but the comfort levels provided by Westpac and NZEC were quite exceptional."

Peter Rowe, NZEC's head of business origination, says NZEC began offering the product six years ago, and that in recent years its scope been adjusted to increase its applicability to exporters.

"A Loan Guarantee can be available for up to five years. An application takes about three or four weeks to approve as NZEC undertakes a higher level of due diligence on the applicant.

"We have an appetite for this type of deal and want to help more established exporters", he said.

"We always complement a bank's services. The banks that take advantage of our products are the innovative ones finding solutions beyond bricks-and-mortar security."