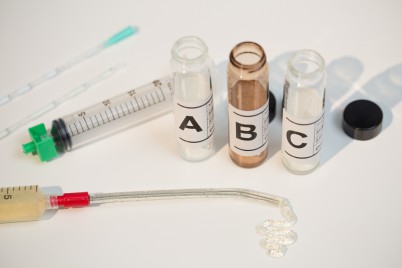 The Challenge: How to finance six-months of manufacturing costs after securing a significant US contract

The Benefit: This insurance policy was assigned to Chitogel’s bank, which supported working capital to fund their first US order

Lean and world-leading medical device company Chitogel had huge ambitions from the start. Beginning in the chemistry laboratories at the University of Otago, it identified an alternative to gauzes for sinus surgery.

Its researchers developed a hydrogel to be used after sinus surgery to stop bleeding. This gel effectively replaces gauzes (which can remain in a patient’s sinus cavity for weeks and can stick to the wound, which then requires more surgery).

Sinus surgery is one of the world’s most common surgeries, and Chitogel focused on building a small, lucrative share of this market in the United States (US).

Chitogel’s commercialisation journey carries a legacy of NZ Inc support - starting with the university’s research, followed by a manufacturing base at the New Zealand Government’s Callaghan Innovation campus in Lower Hutt, and crucial support from The Treasury’s New Zealand Export Credit (NZEC) for its first US contract.

Chitogel operations manager Andrew Park says: “We are a little Kiwi company exporting to the world, and we’ve had the support of New Zealand Government agencies and organisations from the start.”

In October 2017, Chitogel cleared its first hurdle to accessing the United States when it received US Food and Drug Administration (FDA) approval. Chitogel followed that coup with a game-changing, eight-year distribution agreement with the world’s largest medical device distributor Medtronic.

Medtronic’s initial order of 10,000 units would take six months to fulfil.  Chitogel manufactures the raw materials in Lower Hutt and then ships them to the US, where contractors make up the product, sterilise and package it.

Medtronic’s split payment terms were 90 days after purchase order, followed by a final 50% payment after the kits were delivered.  This meant that Chitogel would have to carry a significant cost of their manufacturing for around six months.

“NZEC has a mandate to provide trade credit insurance on creditworthy buyers, where the private insurers are unwilling to,” says Senior Business Originator Phil Quinn.

Phil Quinn explains that NZEC due diligence on this deal was thorough, but swift.  NZEC’s insurance policy was assigned to Westpac, which enabled them to confirm their lending and for Chitogel to begin manufacturing.

Andrew Park says the deal with Medtronic was a huge triumph for Chitogel, but it wouldn’t have been possible to follow through on it without trade credit insurance.

“The NZEC support made that deal with Medtronic do-able,” Andrew Park says.

“Without the insurance, we wouldn’t have received lending, and that would have made it very difficult to launch our product into the US, which is our key market. We would possibly have had to look at selling the technology and, without having proven its worth, we would have probably had to sell it cheaply.

“Instead, we now we have a product which has been in market six months and is selling incredibly well, and we are on our way.”