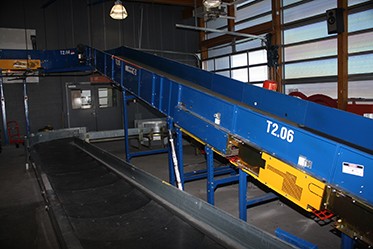 Glidepath may be a world leader in baggage handling systems and a top-flight New Zealand company – but sometimes that’s not quite enough.

Glidepath executive chairman Sir Ken Stevens says the accomplished baggage handling company had more than 20 years of successful six-figure projects in Canada behind it when, in 2014, it decided to bid for a contract worth CAD$700,000.

The company’s impressive track record was attractive to those seeking a contractor to upgrade baggage security screening and handling systems at Prince George Airport, in British Columbia.  However this was a Government funded contract, with strict financial obligations which were challenging for Glidepath to meet.

In order to bid, a company would need to present a surety bond from a registered North American issuer.   A surety bond provides an assurance to the Buyer that if the contracted party fails to deliver, then the surety bond issuer will step in and finish the project without additional costs to the Buyer.

Tina Leung, Senior Business Originator at New Zealand Export Credit (NZEC), says it is typical for Canadian national and provincial funded projects to require a surety bond, often to the value of 100%, and sometimes as high as 200% of the contract value.   “As you can imagine, this can be a daunting prospect for many New Zealand exporters as they may not have the ability to establish these bonds themselves.  That’s where NZEC can provide valuable assistance to a New Zealand company trying to grow their footprint in this market”.

Most New Zealand companies are unlikely to be known by these North American surety bond issuers, nor able to meet their minimum financial criteria or levels of collateral.

This relationship was in place and ready to be utilised when Glidepath approached NZEC for support.  NZEC and LMIC backed Glidepath, the company won the Prince George Airport contract, and the work was completed successfully, without the Buyer needing to draw on the bond.

In fact, Glidepath has gone on to secure around CAD$5m of additional projects in Canada following the success of the Prince George Airport project.  Each of these new contracts has been backed by NZEC surety bond guarantees.

“We’re frequently in to NZEC for their services and we’ve managed to move onto bigger scale Canadian projects which had been out of our reach before,” Sir Ken says. “We’ve secured around NZD$5m of business following the success of the Prince George Airport contract and we couldn’t have accessed those opportunities without NZEC’s surety bond guarantee.”